The wind howls through the trees, carrying with it thick drifts of snow. The frigid air has coated the land in frost and ice.
If not for the ruin of Holborn nearby, the scene would be quite beautiful. All of the trees are white, and aside from the wind, not a sound stirs through the forest.

In Gregor’s sheltered dell, however, there is no sign of winter’s icy grip. The cave is even warm, dry and quite comfortable. It is only by virtue of Gregor’s magics that the dell remains hidden and protected. The land around the cave is yet green, and soft autumn leaves fill every corner, where the wind has collected them. It is an odd contrast, one that distracts from the horrors beyond.
Holborn, but half a mile from the dell, hangs heavy with the shadow of death. Its putrid stench held at bay by the cold.
Using the War Wizard’s necklace, the PCs sent out a distress call that was received by Theldryn Wyvernspur. He has promised to send further aid, although it remains unclear what form that help will take.

Gregor provides the PCs with a warm breakfast of oat porridge sweetened with local honey, and a salty vegetable broth to warm the bones.
As he stokes the fire with a poker, he regales them with tales of the old days, when this forest was untouched. They begin to wonder just how old he is.
The PC’s chat amongst themselves about the best course of action given what they have just witnessed. Knowing that help is on the way bolsters their resolve somewhat, though.

Meanwhile in Suzail, Rhiannon is approached by a War Wizard and her Purple Dragon retinue. She introduces herself as Lurrena Ashwood, and informs Rhiannon of the distress call sent out by her friends in the field. She briefs Rhiannon on the basics of the mission, explaining that she has the means to teleport Rhiannon, herself and her squad to their location. Rhiannon grabs a few choice belongings and rejoins the waiting group. Lurrena produces a magical amulet, whispers a silent command word and the world swirls around them, folds in upon itself, and with a rush of air, deposits them on the edge of a forested dell, where the snow does not linger.

The others hear the teleport spell and rush outside, some ready to fight if need be. They are relieved to see Rhiannon and familiar uniforms standing there, trying to find their bearings in cold, but sunny winter morning.
Rhiannon introduces Lurenna and her friends to each other. The squad of soldiers do the same.
The PCs and Lurenna decide to talk inside Gregor’s home, leaving the soldiers to wait outside. The PCs describe the horrors they have witnessed in Holborn, and the discoveries they have made – the infested elf and the abyssal parasite fill much of the conversation.

Rhiannon also briefs the others on what happened to her while they were in Holborn. Following their return to Suzail with the Prince, and the various ceremonies that followed, she had taken the time to do what she had been tasked to do by her church – to open a shrine to Mystra in Suzail. She had originally found the intended location locked. A priest of Mystra named Pylea had gone ahead to prepare the building, but was not there. Instead she had found it sealed. Upon returning to Suzail, it was still locked, with a spell no less.
Rhiannon decided to magically open it. Once inside, she discovered the interior looked like it had been abandoned in a hurry. Much was in disarray, although not ransacked. She discovered a secret compartment behind the altar beneath a loose flagstone. As she was about to investigate, there was a knock at the door. The visitors did not look friendly. An odd looking tall man with pale features, black eyes, white hair, and dark armour stood before her, accompanied by two brutish looking men in dark leather. On his armour was carved the holy symbol of Cyric.
The man claimed rudely that the building was in fact his, and produced deeds to back up his claim, but Rhiannon saw through the lie. She wisely decided to avoid a confrontation.
Later that evening, the men returned, and broke in to the chapel, and stole something. Rhiannon hired an urchin who spied on them on her behalf. The urchin revealed that he had an artistic streak, and offered her a sketch of what they had stolen. It appeared to be some kind of idol. Rhiannon, being very knowledgeable on the subject of magical history and arcanology, knew instantly what it was. It looked a lot like a demonic idol from the fallen empire of Narfell.

Following Rhiannon’s briefing, the party decides to head south to the elven settlement of Ard’Marie, as that seems to be the logical place to investigate further.
They bid their farewells to Gregor, who declines their invitation to join them, and begin their journey on foot. It’s not that far south, only about a day and a half march.
The first day sees them crossing the icy Immerflow river, heading into Hullack forest, and camp for the night on a slight rise among the trees to have a good view of the surrounding land. The Purple Dragons take over the guard duties, and set up the camp. To their surprise, they wake up the following morning rested and without incident.

On the second day, they continue their journey south, picking their way through the forest cautiously. The land begins to rise ahead of them. becoming ever steeper and boulder strewn. The trees also grow denser here. It isn’t long before they are facing a choice. The land ahead rises steeply up, but is also split by a natural fissure a few tens of feet across at the base. The fissure has a level floor, and seems to wind out of sight after a while. The group decide to avoid the lower path, and instead climb up and over the hill.
It doesn’t take long for them to realize they made the correct choice. In the darkness of the chasm below they spy webbing criss-crossing the walls, and dark shapes moving about. 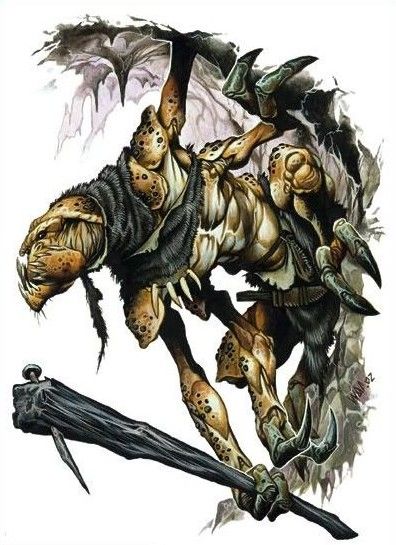 As the group crests the hill, they all see the tell tale signs of civilization ahead. About a mile from their position, they see archways and the beginnings of a path. Beyond that, elven structures and tree dwellings. The trees also thin slightly here, causing the forest floor to be dusted with snow.
With their destination in sight the group proceeds with renewed vigor in their step. Then it happens. The leaves in front of the group explode upward and a spike trap whips up, impaling one of the soldiers. He dies on the spot. Alarms are raised, when just a moment later, a horrid humanoid chitinous creature bursts out of the hole and savages another soldier. He too is felled.
The PCs, Lurrena, and the remaining soldier rally, and fight back. A second creature ambushes the flank, and a savage melee ensues.
Frak is poisoned, but manages to resist the worst of the effects. Together, the group makes short work of the creatures, with no more casualties.
They leave the bodies of their fallen soldiers behind, and Valeria leads the group in a short prayer to honour them. Lurrena leaves a wizard mark on a tree to help her locate the bodies at a later time, so they can receive a proper burial.

WIth only a mile to go to the outskirts of Ard’Marie, the group wastes no more time. They arrive at the first archways leading into the city, noting an inscription on one of them in elven saying “Here we reside in peace”.
They notice a lone figure standing in the clearing of the path ahead, a solitary sentinel, quiet and unmoving. They see from his stance and silhouette that he is an elf, and suspect he is infested. Rhiannon casts a spell and confirms this. Kyuubi draws her bow and fires an arrow directly at him. It strikes him in the shoulder, but does not fell him. The elf does not move or react in any way. She fires a second arrow, and this time pierces his throat. He drops like a sack of flesh, dead.
The elf’s behavior has them puzzled, and wary of what lies ahead within the settlement.

They decide to proceed. The path leads up and over a rise, and they hear the distinct sound of waterfalls. When they crest it, they see the darkened splendor of Ard’Marie, it’s many tree dwellings, and interlocking bridges, platforms and walkways. They see several forest streams coming together and falling into a chasm that flows away from them, filling the air with a fine mist. Beyond this, they see no signs of life. Yes, there are lights dimly illuminating the dwellings, but they seem to be magical in nature, almost natural. They also notice that winter’s grip has not touched the town. There is no snow, and much like Gregor’s dell, the temperature seems to rise considerably as they proceed further in. 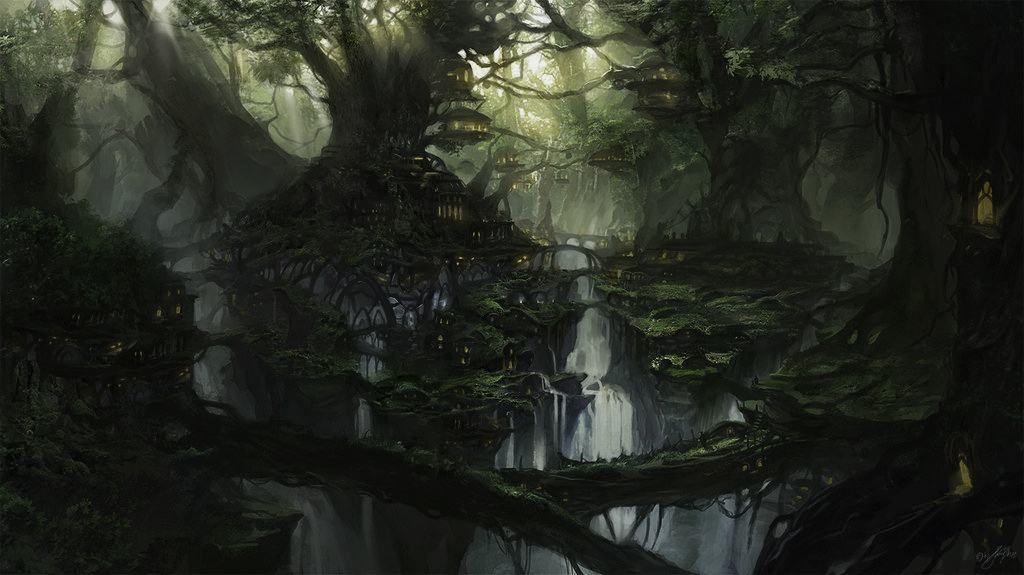 Inspecting the first hollowed tree they find a withered husk of an elven man, seated at a table, a glass of wine in his hand, stiff with rigor. His mouth hangs open as if in a final scream. The PCs conclude that this place has been affected by the same fate that befell Holborn
They continue their investigation out the far side of the chamber, exiting onto a wooden platform leading onto another bridge that crosses one of the streams.
Suddenly they are ambushed. Arrows rain down upon their party from above. in the opening volley, each of them are hit by multiple shafts. Five of the soldiers fall to the floor, seemingly dead. The others are badly hurt. Lurenna responds by casting a Wall of Fog, obscuring the party from their attackers. The fight that follows is brutal. They PCs use healing magics to patch the worst of their injuries, and rush up the stairs of the first chamber to ascend to the level of their assailants. Battle is joined a the top of the stairs. Valeria fights valiantly, killing several opponents, but is cut down, only to be saved by Lurrena. Kyuubi kills several with well placed arrows. Frak uses his stealth to great effect and stabs one in the back. Rhiannon uses her healing magics to aid her companions. The remaining soldiers manage to return fire with using their fallen companion’s loaded crossbows.

After several elves are slain, the remaining ones flee from the battle. Six elves lie dead, each with a parasite on their necks. To their relief, Lurrena and the remaining men discover that 4 of the soldiers aren’t dead, but unconscious. Healing magic restores them to fighting form.

Now to see where the path ahead leads……

The Quiet Lands: Part 1 The Doom of Holborn