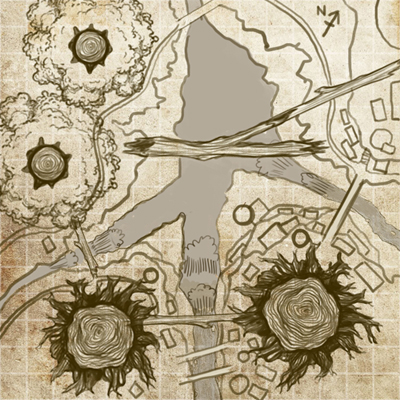 The settlement of Ard’Marie trembles with the rush of its many waterfalls. Fine mist fills the air of the gorge below the bridge the PCs are standing on. As they recover from the rush of battle, they get their bearings once again. The infested elves have fled, leaving the PCs to wonder if more ambushes await them.
Rhiannon uses a Detect Evil spell to divine the direction from which the highest concentration of malice seems to be coming from. Her spell reveals that it lies to the west of their position.

The last light of the day filters through the tree canopy above, and the group realizes they are running low on spells. The PCs debate the next course of action, discussing the options that lay before them. The suggestion is raised that it might be wise to rest and renew their efforts the following day.
Lurrena, who has just helped the wounded with potions, suggests they to make a strategic retreat from the town. Although some of the dwellings are defensible, they wouldn’t get much rest if they were attacked.

The decision to retreat is made. Heading north and east, they make their way out of Ard’Marie, and into the woods beyond, taking care to hide their tracks. After a few miles walking, they discover a sheltered, but abandoned bear den. The group bed down for the night and relearn their spells.

The following morning, they wake to find fresh snow has fallen, obscuring their tracks, but making it harder to disguise fresh ones. They discuss their options, and decide to head due south to skirt around the town, and then to head west to find the source of the evil they had divined before. After a hot cup of tea and some dried rations, they begin their march, keeping weapons ready, and their senses peeled to the sounds of the forest. It is eerily quiet. Not a sound of wildlife can be heard, but for the soft creaking and rustling of branches in the wind and the distant sounds of waterfalls.

As they pass the town on their right, the elves in the party detect the distinct sound of an animal running, and panting. They quickly conclude it’s a wolf or large canine of some kind. Then they spot it. Sprinting through the trees ahead from right to left. It moves so fast only Kyuubi has a chance to loose an arrow before it is upon them, barreling into their left flank. Kyuubi’s arrow hits its mark. Then battle is joined as it bites Kyuubi with a horrendous maw, dealing her a viscous wound on her leg. A second beast rushes them from the right attacking the Sergeant, wounding him too. The creatures are truly horrible to behold. They appear to be large wolves, infested with engorged abyssal parasites. These parasites appear to be larger that the others they had encountered. 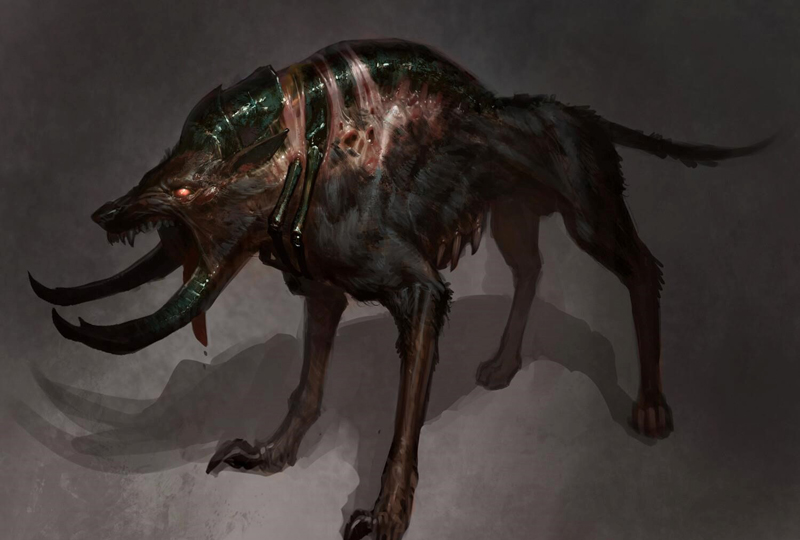 The battle is fierce, but short. The PCs and Purple Dragons unleash their loaded weapons and spells upon them. It becomes clear that their bites are also venomous, and more magics are used to heal wounds and slow the toxins.
Frak attempts to harvest the venom glands of the parasite, but fails to do so.

The party presses on, determined to reach their goal. The source of this malice. Valeria urges Frak to scout ahead to avoid ambushes in future, and he does so,

South of the town the turn right and head west, along the rising landscape. They reach the river that flows into town, and cross it. Moving up the hill towards an elevated plateau where more waterfalls can be heard. They spy a series of older buildings that lead up the hill. Ancient stairs, archways and a vaulted tunnel passing through a wall of natural rock. A lone elf is spotted heading towards the town, away from their position. They wait for him to pass.
Frak scouts the tunnel and determines it’s clear. They pass through, and emerge the other side looking out over a pair of majestic waterfalls, spanned by crumbling stone bridges.
Valeria recognizes the architecture as ancient elven. Clearly these structures date back to ancient Cormanthor.

As they cross the span, they once again hear the footfalls of the infested wolves. They are attacked from either side. Two from the front, two from the rear, the wolves somehow managed to slink around behind the party without being noticed. The battle is joined. The two in the rear face off against Frak, Valeria, Rhiannon and Kyuubi, The front two face the Purple Dragons and Lurrena.
The battle is fierce and brutal. The beasts seem driven by a ferocity that can only be explained by the demonic parasite, fighting to the death. Thankfully, the group all survive the encounter. After healing a few injuries, they move forward.

As they progress through the darkening forest, they spy the entrance into a small sheltered vale, where the elves would have congregated to commune with their gods. The lush foliage and beautiful landscape is veiled in low hanging mists, and the sounds are muffled by the proximity to the waterfalls.
The trees in the vale form a dense canopy that allows only a little light to illuminate the ground below but shafts of sunlight do filter in illuminating patches of ground. Large boulders the size of small houses lie strewn about the place, blocking the line of site to the middle of the vale.
The party asks Frak to scout out the vale to get a clearer picture of what they are walking into. The malicious emanations all seem to center here, so Frak proceeds with extreme caution.
As Frak climbs the nearest boulder to get a clear view, he sees it.

In the middle of the vale lies a small lake, more of a large pond, with an even smaller island in its center. Upon this patch of ground he sees a creature easily thirty feet long, with the grotesque body of a giant centipede, and the muscular torso of a humanoid demon. Its head is insectile and bestial, with mandibles, carapace and many beady eyes. It’s torso sprouts a multitude of limbs all ending with viscous looking barbs. It moves fluidly and with purpose as it hangs a webbed humanoid from a low hanging tree branch, where it joins a macabre larder of cocooned bodies. Upon the ground, skeletal remains lie strewn and discarded. The smell of rot and sulfur rises from the lake, where other dark shapes can be seen slithering beneath the still surface.
In the surrounding landscape, he spies several large holes, presumably made by burrowing creatures. 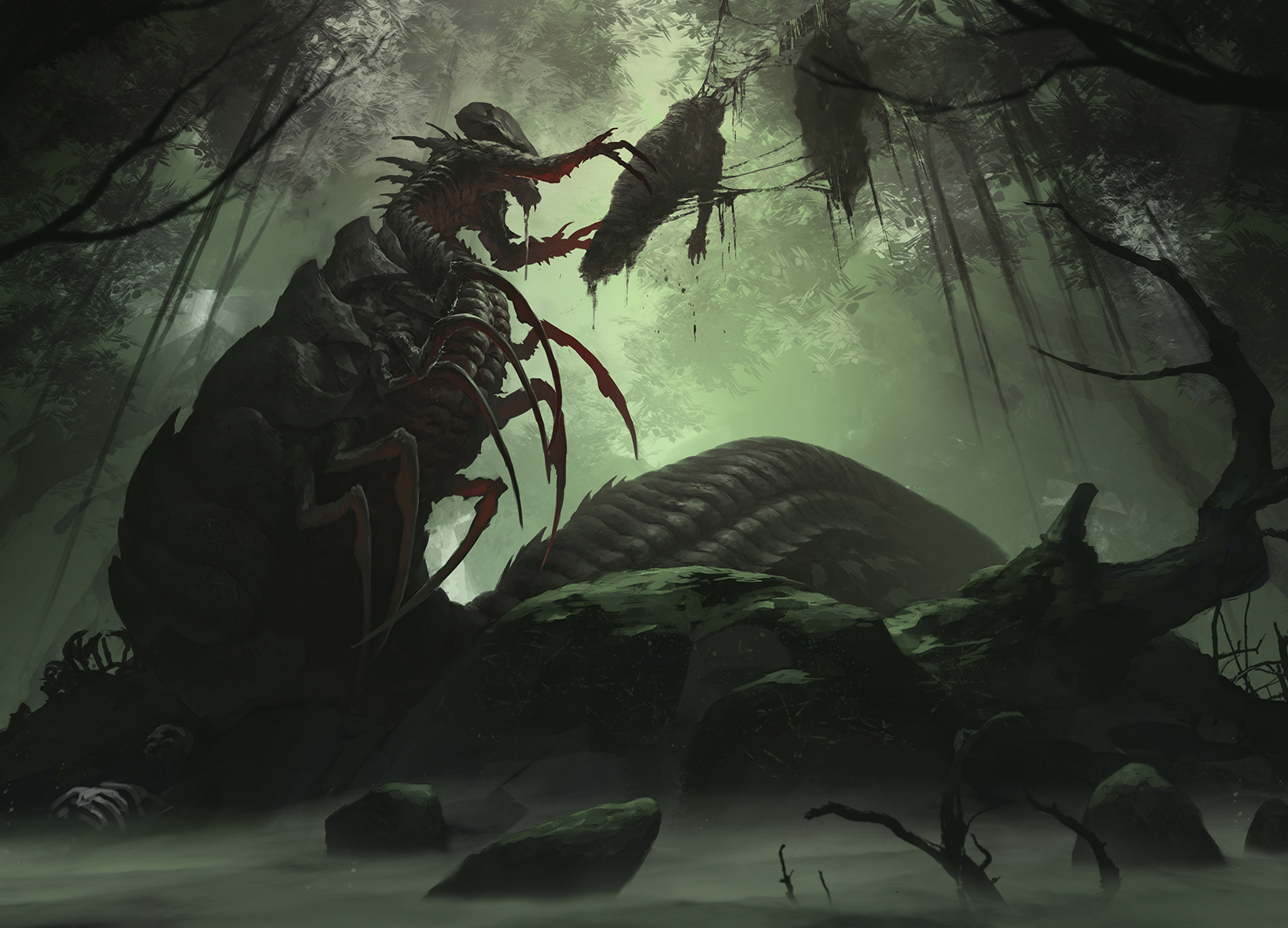 Frak returns stealthily to the group, and reports what he has discovered with some trepidation. After some silent discussion, they decide to set up an ambush.
Setting up the Purple Dragons on the boulder, and the PCs flanking it, they manage to catch the demon off guard with a brutal surprise assault of missile fire and spells.
This attack injures the demon quite badly, but their sense of achievement it short lived as the demon surges into action.

The creature moves with remarkable speed and fluidity. It turns to face them and webs the entire group with a powerful spell. The PCs manage to avoid the worst of it, but the webs cover the entire boulder, immobilizing the Purple Dragons completely. As this happens it cries out in its demonic tongue summoning forth its allies from the burrows around it. Five horrid looking giant ants and two giant centipedes crawl out and surge towards the party with lethal intent.

Valeria attacks the demon head on, taunting it to focus on her.
With the demon’s attention on Valeria, the others attack it with spells, arrows and blades.
The ants pass Rhiannon and Lurrena, but Rhiannon protects herself and Lurrena from evil. The ants charge past them, and attack the soldiers trapped on the boulder instead.
Kyuubi fires arrows from cover, but is also attacked by the ants. 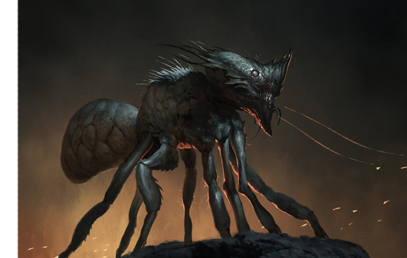 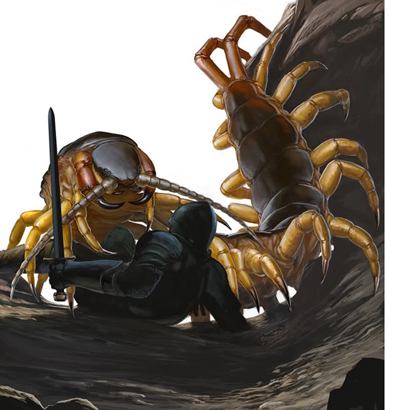 Frak tries to use a touch spell, and Lurrena attempts to cast a ray at it, but the demon’s abyssal nature protects it from their magics.
Rhiannon rushes in to cast a Protection from Evil on Kyuubi. Saving her from the ants. As a result, the soldiers become their only targets, and their fate is sealed.
Valeria, trading blows with the demon, is hit by flurry of brutal attacks from the demon and almost dies, but is saved by a well timed healing potion.
She dives under the water to cut the demon where she hopes it is most vulnerable, the belly. She sinks her blade into its flesh, and it almost crushes her in its agonized throes.
Frak having been distracted fighting centipedes. sees an opening, and backstabs the demon. This is the blow that finally kills it, destroying its earthly form.
Valeria manages to roll out from under it, as it crashes to the ground, oozing black ichor into the fetid waters.

The remaining ants and centipedes, having witnessed the destruction of their master, and having whatever hold on them it had dissolve, flee into the surrounding burrows. Vanishing from sight.

The PCs survey the damage of the battle, and take stock of the fallen. All the Purple Dragons are dead. Their corpses are almost mutilated beyond recognition. The ants acidic attacks having dissolved whole pieces of armour and flesh alike. Valeria and Kyuubi are still injured, though still standing.

There is much to still explore, not least of which is the demon’s lair. 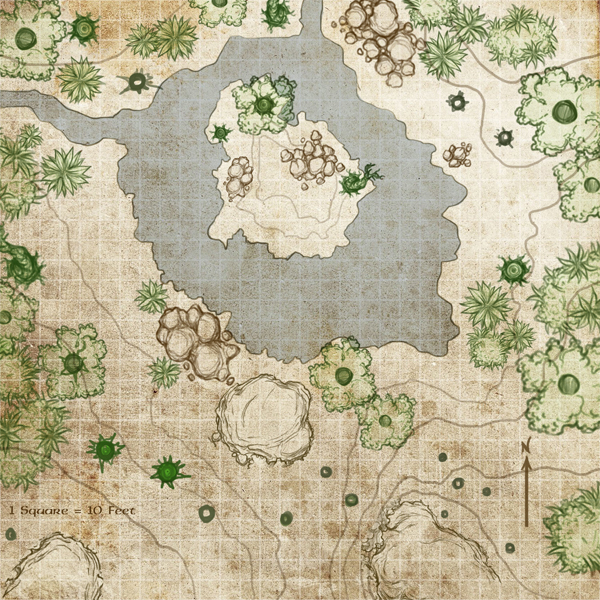 The Quiet Lands: Part 2 The Horror of Hullack

The Quiet Lands: Part 1 The Doom of Holborn