Princess Filfaeril Obarskyr is dead.
The implications of this discovery weigh heavily on the PCs and the leadership of the War Wizards.
How long exactly had she been dead exactly? Estimates range from two to three years at least.

It becomes clear to the PCs that the impostor had unchecked access to the court, it’s resources, and the ear of the rest of the royal family.
How many Royal decisions has she managed to influence? Someone in that position with an intent to do harm surely must have done a lot of damage beyond the obvious.

With a direct connection to the The Kor’Nar Relics, Caladin of Cyric, and Duke Aris, it stands to reason that she was instrumental in the death of Queen Tanalasta (which would explain why the assassins knew so much about her protections, and had access to such dark magics), the abduction of Prince Azoun, and the coup of the long lost Prince Foril (and presumably the prince’s untimely end when his usefulness had run out).
Additionally, with all that being true, what is her motivation? It is clear she is seeking to assemble the Nar atifacts, but to what end? One possible option that is voiced, is that she intends to liberate the Demon Lord Eltab from the void of Nil Space. With the information uncovered by Rhiannon, there is a strong case to be made for that hypothesis. Eltab is, after all, still tethered to Toril by the strong binding ritual that summoned him all those millennia ago. Rumours of Demon Cysts in the Cold Lands of Faerun still abound, and talk of demon cults in the Great Dale, and war in Damara only strengthen these.

The group have an emergency meeting with the only three others to bear witness to this revelation – Baskor Tranth, Theldryn Wyvernspur, and Lurrena Ashwood.
They agree to keep this fact a secret until they decide what course of action to take to unmask the impostor.
Many possible options are discussed, what type of creature it might be, or what kind of sorcery might be involved. It is agreed that whomever or whatever the living Princess is, she needs to be stopped. They also debate seeking out the remaining Kor’Nar Relics, but it is ultimately agreed the Princess is the priority.

With so much as stake the PCs and the War Wizards hatch a plan.

They decide to set a trap for the impostor. They wait for the Princess to go out for a ride with her escort, and prepare to ambush her upon her return the palace, in a lavish sitting room adjacent to the stables and mudroom.
They scour the library of the College to find a spell called “Proof from Teleportation” that will allow them to prevent the impostor from making a rapid magical exit. They thus prepare the room with the spell and themselves with all manner of enchanments and abjurations. Baskor Tranth joins them.
Valeria casts a Divination spell to give her insight before the trap is sprung. The answer she receives is “Where is Theldryn Wyvernspur now”. This revelation prompts Baskor to cast a quick divination spell of his own, and he quickly realizes that Theldryn is about to warn the impostor of their plans. He bids the party good luck and God’s speed, and vanishes in a burst of apportative magic, presumably to intercept Theldryn.
Hiding in the corners of the room in various ways, some magical, some not, the PCs wait in tense silence for the Impostor to return.

Soon they hear the telltale hoof beats of their quarry and her entourage returning from the forest.
The Princess’ escort of Purple Dragons veers away and ride to assume they duties elsewhere, as she and her handmaiden make their way into the mudroom to rid themselves of their riding boots, cloaks, hats and gloves. The concealed PCs hear her giggling with her handmaid, making small talk and sounding otherwise unremarkable. Where it not for the fact that they had seen the corpse of the Princess mere hours before, the thought of attacking her would have seemed anathema. The PCs steel themselves, checking in with each other one last time.

The impostor and her handmaiden waltz into the sitting room with a relaxed confidence as befits a princess, making her way to the table with refreshments. She asks her maid to prepare a drink for her as she heads toward the couch.
The PCs spring the trap, using the element of surprise.
Using a summoned unseen servant, Kyuubi slams an outside shutter shut, blocking one of the windows and darkening the room. She then intones the words to a Lock spell to secure the door and seal the princess in the room.
Frak lunges forward and attempts to stab the impostor with his new rapier. It hits home, skewering her in the back, much to his satisfaction. First blood is spilled. The impostor howls in pain and anger, only to be attacked by Valeria with her two blades. Only Valeria’s magical Elven blade slashes her flesh, forcing her back. Rhiannon, invisible, uses her unseen servant to close the remaining shutter outside, plunging the room into darkness but for the light from the fireplace, and casts a Detect Magic spell. With it she realizes there is a haze of enchantment hanging like a cloud over the handmaid’s head, leading her to conclude the servant is charmed.

The trap sprung, the impostor spins around in desperation in the center of the room. It is clear she is being assaulted from all sides. Kyuubi fires her arrows at the impostor, hits, but they fail to injure her. They simply phase through her as if she was not there. It dawns on Kyuubi that she is impervious to her arrows. The impostor lunges for Valeria and grabs her head with both hands. She plants a firm kiss on her lips. Valeria begins to feel the draining power of the kiss almost immediately, and focuses her will to wrench free from the embrace. She breaks the bond just in time, and is unhurt by the attack, but knows she faces a dangerous foe indeed.
Valeria tries a different approach, and uses her first attack to trip the impostor. She may have many defenses, but she’s more vulnerable when off her feet. The tactic works, and the princess falls to the ground, taken off guard. Valeria follows up her attack with a powerful thrust which pins her to the wooden floor. The impostor hisses at her in pain and anger.
Frak uses the opportunity to his advantage and stabs her with his blades. His attacks do damage, but are not devastating enough to kill her.
The impostor cries out to her handmaid to help her, who produces a small glowing crimson gem from her pocket, intones a quick command word, and a titanic ball of flame engulfs the entire chamber. The shutters are blown open as the windows shatter outward, once again flooding the room with daylight.
The servant is obliterated in the explosion, and everyone in the room ducks for cover, attempting to avoid the flames. Frak’s nimble reflexes save his life as he manages to throw himself out of harm’s way. The others are not so lucky however. Both Kyuubi and Valeria are badly hurt, but Rhiannon is blasted against the wall, unable to react in time. Her body outlined in bright flames, blackens and crisps in the conflagration, and falls to the ground seemingly lifeless, though still invisible. The furniture and drapes are set ablaze by the blast, complicating matters further. 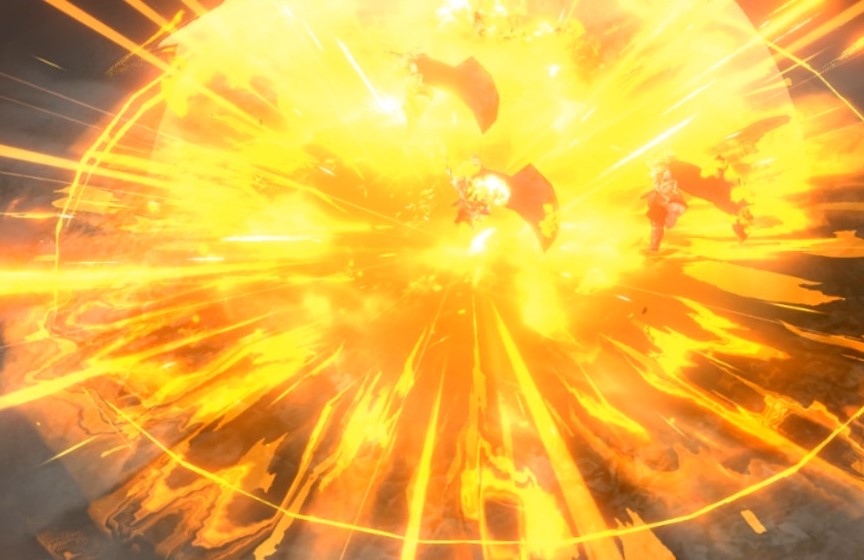 The PCs are reeling from the blast trying to get their bearings. The impostor, who is immune to the flames, focuses her will and attempts to cast a Teleportation spell. Much to her horror, the spell fails to activate in the specially prepared chamber. Her features betray her growing desperation.
Valeria urges Frak to hold on to the blade pinning the impostor to the ground, as she goes to find Rhiannon to help her. Frak does so, causing her more injury. He follows it up with another stab of his rapier for good measure. Kyuubi attempts to avoid the flames that rage all around her, to also help her injured friends. The heat and smoke continue to damage the PCs.

The Impostor tries one last ditch attempt to escape, once again focusing her will. She becomes Ethereal and vanishes from sight. Frak, still holding Valeria’s blade, realizes first that she is gone.
As Valeria reaches Rhiannon’s limp, smoldering body, she falls to her knees at her side. Rhiannon’s body becomes visible, and for a drawn out moment Valeria assumes the worst, but then she senses a glimmer of life. She pours healing magic into her body, and Rhiannon coughs and opens her eyes.

The PCs hear the screams and commotion coming from the courtyard outside. Purple dragons, servants and others all working together to pour water into the room through the windows to douse the flames. The soldiers burst into the chamber and help the PCs to safety.

The group is given water and blankets, and escorted clear of the activity in the expansive courtyard. It is then that Baskor Tranth returns with a rather embarrassed looking Theldryn Wyvernspur. He greets the PCs, and explains that he intercepted Theldryn before he was able to warn the Impostor. He also mentions removing the enchantment she had cast upon him. He was clearly charmed into doing ill.
Rhiannon realizes, with her knowledge of Cosmology, that they have just fought a Succubus. A Tanar’ri of considerable power, known for their ability to beguile and manipulate mortals, and their ability to assume the appearance and identity of anyone they wish.