Following the confrontation with the Succubus, the PCs agree that time is of the essence.
There are other Kor’Nar relics still out there, that continue to exert their dark influence on the innocent. Of those, two relics have surfaced through rumour and divine insight. The Idol of War in Damara, and the Idol of Gluttony in The Great Dale.

The PCs take a few days to acquire some much needed spells, and seek out what information they can on their foe, and the land of Damara. Kyuubi also combs the city of Suzail for a suit of Zakharan silk armour, a type of armour known for its flexibility and comfort that allows the wearer to cast arcane spells. Her efforts avail her little, and she is informed by several armourers that such fine armour can only be found in either Zakhara, or along its many trade routes. One such route terminates in the city of Telflamm, Thesk, where the Golden Way meets the Sea of Fallen Stars, and many exotic goods flow into this part of the world. Frustrated, Kyuubi returns to her companions.

The PCs meet with Baskor Tranth in secret, and agree to keep their mission under wraps. He informs them that the Crown Prince has been briefed on the events in the palace, the Succubus, and his sister’s death. Distraught, the Prince has delayed his coronation, in the hopes this matter will be resolved before such ceremonies take place. He also informs them that he has seen to it that all of the Royal court has been screened, including the leadership of the Purple Dragons and War Wizards, to ensure the safety of the crown.

Plans are made to set off to Damara, to begin the search there. Baskor informs them that the teleportation amulets are no longer functioning, as a direct result of the idols being housed in the College. It appears their ban on apportative magic has extended to all items fabricated within the College, thus preventing them from making use of them to travel swiftly to the Cold Lands. He does, however, assure them he can transport them himself using his own spells. This does of course mean they will be without a quick method of travel home.

Further planning leads them to alter their route to Damara, by teleporting to Telflamm in Thesk, and from there securing passage upon a ship to the Impilturian port of Ilmwatch, by way of Uthmere in The Great Dale. This will allow Kyuubi to search for a suit of Zakharan silk, and give them an opportunity to question the locals in Uthmere directly about any rumours coming out of the highlands of the Dale, and fel ruins like Val Murthag, and others.

Baskor Tranth agrees to take them to Telflamm. With Rhiannon ill in bed, the PCs ask if Lurrena would be willing to join them on their quest, and she agrees. Baskor assures them he can help Rhiannon rejoin her companions as soon as she recovers from the lurgy.
Soon, they are packed and ready to depart. Baskor casts his teleportation spell, and once again, the world is folded in upon itself, reducing to a single point, then unfolding rapidly. It deposits them upon the shore of fine sand, lined with palm trees. They stand mere yards from the city of Telflamm, gazing in wonder at the tall, crimson lacquered walls, bloated columns, and dizzying battlements. At the foot of the walls, a hive of figures busy themselves in a bustling, broad harbour, where ships of every design lie anchored.

Telflamm sits at a junction of the Sea of Fallen Stars and the western terminus of the Golden Way, the road that connects to the far reaches of Kara Tur and Zakhara. The city is a melting pot of culture and commerce from all over the continent.

The PCs make their way to the nearest gates, and join stream of colourful caravans and people slowly making their way into the city. Although there are guards by the gates, they seem quite happy to let everybody in and out, and seem more interested in simply keeping the flow of traffic going. The amount of people here is quite surprising to the group, as their senses drink in the new wonders around them. Once inside the gates, the throng filters into the maze of streets beyond, allowing the PCs to take in the local culture.
The market stalls lining the streets hang with a myriad of exotic goods, hawkers shout at the crowd, plying their wares. The scents and aromas of roasting meats, curries and spices fill the air, mingling with the stink of draft animals. They see people selling carpets, clothing, fabrics, food, smoking devices, weapons, armour, exotic birds, and all manner of trinkets, and gaudy baubles. It seems as though the entire city is one expansive market. 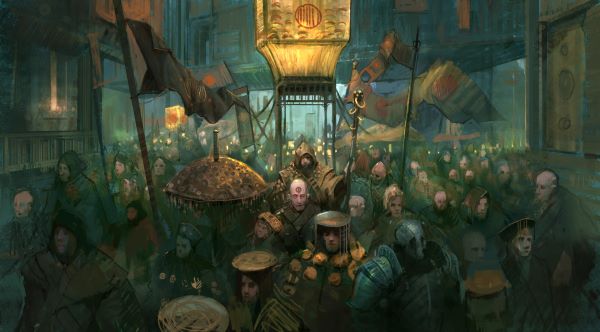 The city’s open door policy seems to create a natural peace, although a hectic one. Crime seems to be quite rare.
Kyuubi sets about trying to find a vendor of Zakharan silks. She approaches an armourer dressed in colourful attire. He introduces himself as Khafful. Although he only speaks broken common, he informs her that he does not have such armours, but knows of a man that does. A colleague of his named Ibrahim. He directs her to a courtyard market a few streets away. They find the market with relative ease, and emerge into the white, decorated courtyard, where several merchants have set up shop. Several of them seem to be negotiating with customers in the center of the open space where a fountain gently flows.
Ibrahim’s stall is located in one of the arcades surrounding the square. He welcomes Kyuubi and the others, and shows her his wares. Fine Zakharan silks made in all white fabric. They negotiate the price and she agrees to buy two suits. He offers her a small box as a gift with the purchase. Frak becomes immediately suspicious, and inspects it for traps. He finds none. It turns out to be a repair kit for the silk armour.

To continue their journey, they go to the docks to book passage on a ship travelling to Impiltur. They meet a tiefling captain by the name of Horgast Sprüng, an Impilturian native in command of a coastal trading vessel named “The Silver Zephyr”. They agree to a price of one crate of Bloodstone from Damara, to be provided upon their return to Ilmwatch, and 22 gold to get them there.

He tells them that they will be leaving in two days, so the PCs take the time to sample local delicacies, take in the sights, and gather as much information about their destination as they can.
Frak finds a weapon master, to help him learn the secrets of fighting with two weapons. Valeria speaks to local caravan masters to gain some insights into the Great Dale.
Kyuubi uses her time to look into purchasing property to further her family’s needs.

At night they stay at a local inn and are offered a spicy drink (called Khaff) by the proprietor. His half-orc step son Tim’ka brings it to them. It has a worm in it.

Finally the time arrives to set sail. Captain Sprung follows the coastline north for the better part of a day, and as evening approaches they spy the lights of a town ahead. It is the port city of Uthmere, a relatively small settlement in the Great Dale, but also it’s only trading hub along the coast.
The PCs ask to take a moment to inquire about the Dale in the city. They find some food and visit the Hall of Brilliant Justice, the temple of Tyr the Even Handed.
Inside they meet an elderly priest by the name of Blostin Marsk.
After some brief introductions, he shares his knowledge and concerns with them. He tells them of rumours of sinister deaths in the city of Bezentil, where all involved were either forcibly fed to death or were already overweight.
When informed about the Kor’Nar Relics, he is visibly shaken and offers to help however he can. They promise to meet again upon their return to Uthmere.
For now, the PCs return to the Silver Zephyr and resume their journey north towards Ilmwatch. The dark shores of Impiltur loom beyond the horizon, and an idol beckons.

When Darkness Calls: Part 2 The Trap