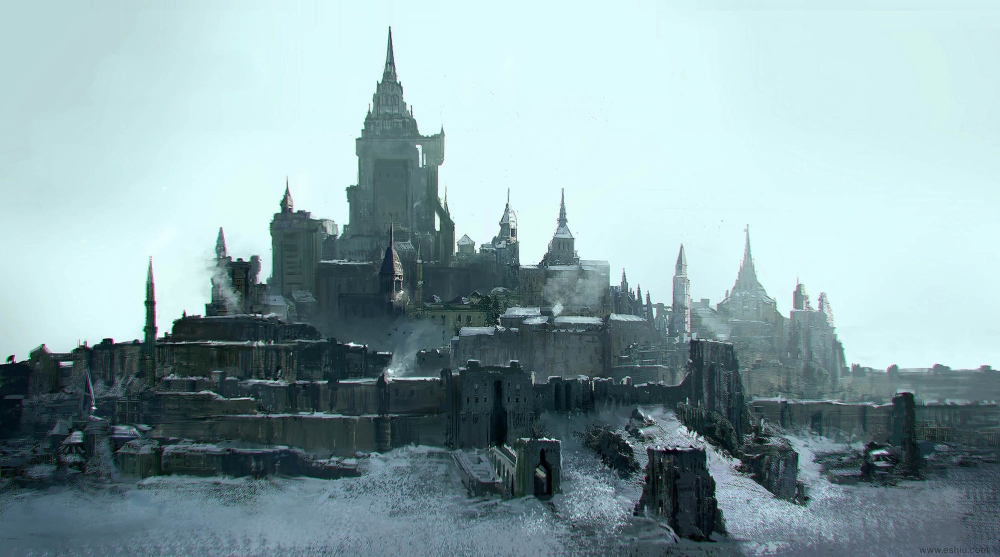 After riding north for several days, The PCs arrive at the former capital city of Damara – Helgabal.
Rhiannon has volunteered to return to the caravan to warn them to turn back.
They stand atop a crest overlooking the approach to the city, within sight of the southern gates, which now hang broken and open. The scene before them is one of devastation. Broken siege towers and other engines of war lie in ruins before sections of cracked and shattered walls. Bodies litter the ground around the base of the walls. Others burn in massive pyres lit days before, the black pillars of acrid smoke rising from several dozen such mounds in the fields in front of the city.
Clearly the victors have departed, and left a ruin in their wake. The tracks of an army can be seen even from this high vantage point leading off west around the city, and then north.

From their vantage point, they hear the sound of fierce battle coming from the forest to the west. The distant din of steel clashing against steel fills the air. The fighting seems contained, but as they watch, they see groups spilling into the fields beside the tree line. From what they can tell, the fighting looks desperate, and utterly without mercy. The idol’s influence is clear even from this distance.

They decide to ride for the main gate, and make it there unscathed.
Entering the city, they see the portcullis is open, and the streets appear deserted. They enter the gate house and drop the portcullis. After a brief discussion, they decide it is best to leave Bogol and his men there with the horses. They happily agree, and barricade the door as the PCs leave.

Valeria, in the hopes of getting some bearings, casts a detect evil and determines the strongest source is coming from the north. Toward the middle of the city. They make haste, with the spell acting as a homing beacon, guiding them deeper toward the source of all this chaos and evil.

Proceeding north into the city, the streets are draped with late winter fog, hiding what lies ahead. The PCs proceed cautiously, flinching at sudden noises. A shutter banging in the wind. Dogs barking in the distance. Crows flying overhead. The gothic architecture only serves to accentuate this apprehension. 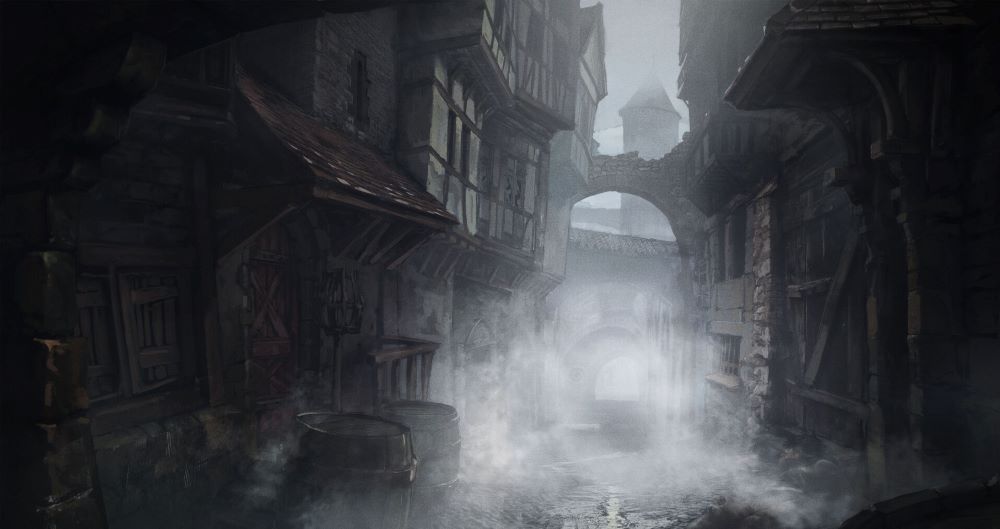 With their senses peeled to their environment, they hear them before they see them – an undulating mass of small rotund and grotesque figures. They shamble down the street looking for any sign of life. The PCs manage to avoid them, however. 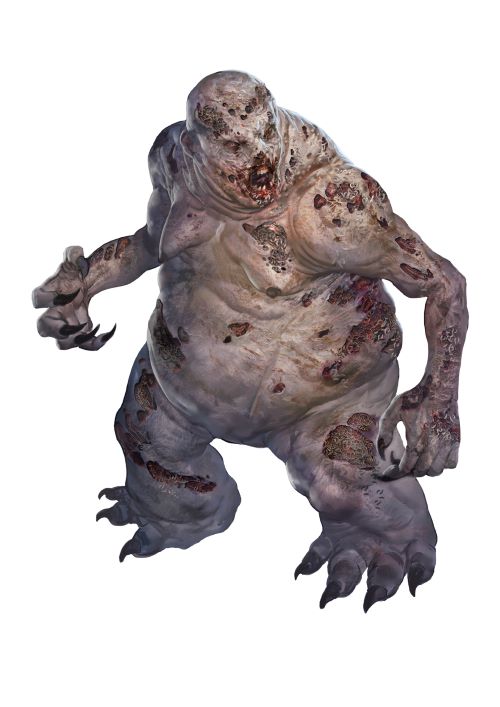 Not long after, they spy a different group of horrid figures, these are larger, but no less repulsive. The gaggle of creatures has a scent of sulphur about them. The group manages to avoid these too, using stealth and magic.

Finally, they arrive at a large square. At first it looks empty, but then they spy a large mob of people, soldiers by the look of it. They see at least several dozen figures at the far end of the plaza, although the hanging fog makes it hard to get an exact count. Their eyes appear to be glowing blue, and they are milling around what looks like a well, or fountain of some kind. 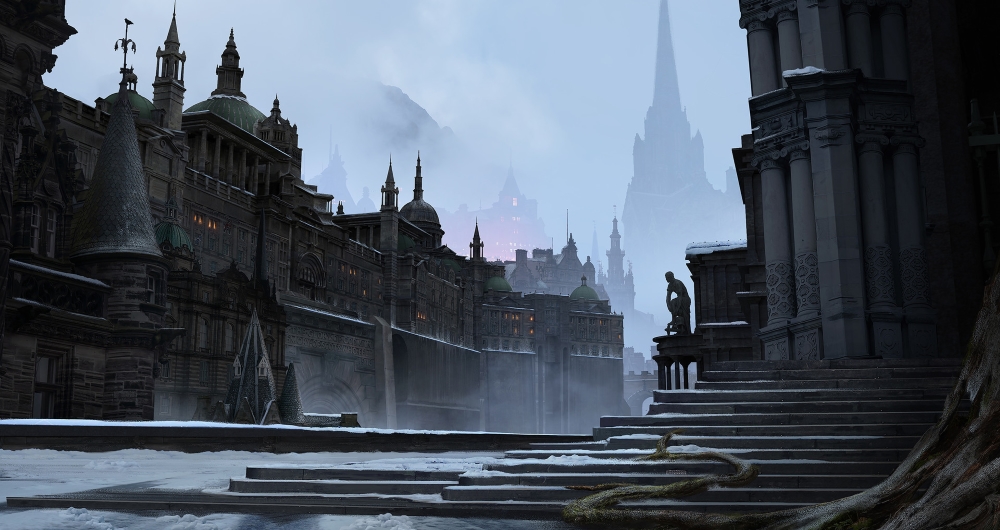 As they stand there observing the mob, their gaze intent upon this potential threat, they are attacked suddenly from behind by six of the larger demonic creatures.
They claw and bite at the PCs with unbridled fury and blood lust. The fierce combat is brief, but with each creature they slay, they expel a large poisonous cloud, which forces the PCs to fight for breath as they take damage. Finally, their enemies bested, they put as much distance between themselves and their bodies as they can. Kyuubi finishes two of them off (they were only knocked out) from a safe distance with her arrows, to avoid the inevitable poison clouds. 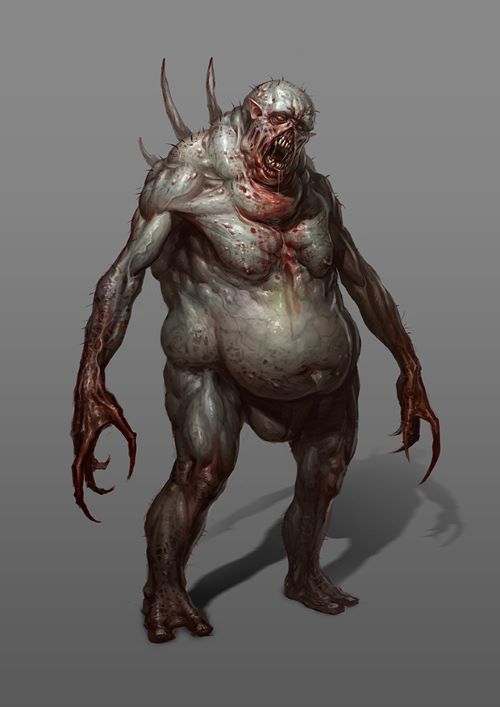 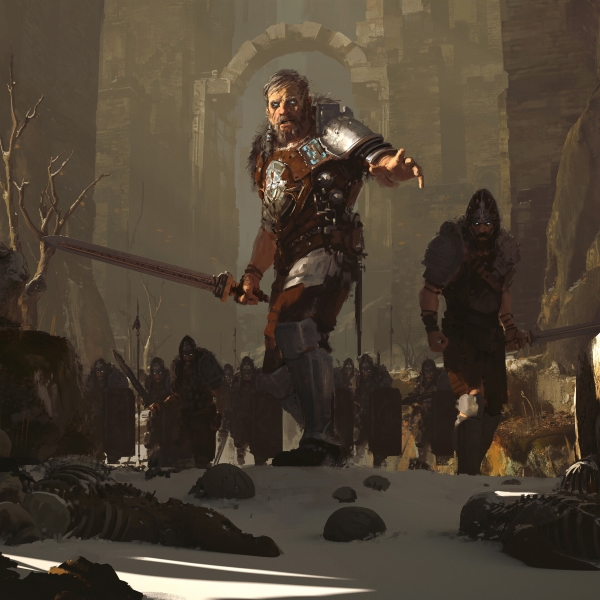 They skirt around the western edge of the plaza, and approach the mob, but the mob, drawn by the sound of battle approaches them as well, too many to count.

Suddenly, without warning, there is a magical shock wave of dark energy that radiates out from the well. It washes over the entire city in a matter of seconds, a pulse of demonic compulsion from the Kor’Nar idol. Frak and Valeria are unable to resist its effects, and are immediately overcome by an overwhelming bloodlust. They feel every ounce of anger they have ever felt and more well up to the surface and take hold. The need to kill is suddenly paramount. All else is but an afterthought.

Kyuubi, seeing her companions so consumed, presses on to the well, invisible, determined to locate the idol.
Frak and Valeria, consumed with primal rage, lay into the mob of soldiers that is now pressing in upon them. Lurenna, seeing no alternative, attacks the mob as well, in the hopes of improving her companion’s chances of surviving an angry mob.
Valeria channels her rage toward the enemy. She kills five of the clearly inferior warriors with her combat dominance. Frak kills another two. Lurenna unleashes her first fireball ever, that detonates in the center of the mob, killing almost a dozen men in one volatile explosion of flame. The remaining mob turns on Valeria and Frak, severely injuring Frak with multiple attacks.
Frak attacks again, and Lurenna uses a Burning Hands spell to great effect. Valeria presses through the mob, somehow managing to avoid all their attacks on her, and runs to Kyuubi’s position by the well.
The mob attacks Frak again, bringing him close to death.

Kyuubi meanwhile has made it to the “well”, which turned out to be a spiral staircase heading down into the sewer system below the city. The stairs descend only 10 feet before ending at a landing with an iron gate. She can see into the darkness beyond, but cannot continue, so she bides her time, waiting for help to arrive.
Frak and Lurenna also start to head that way.

Frak, Lurenna, and Valeria make it to the well. Valeria manages to pour a Cure Serious Wounds potion down Frak’s throat. He heals almost up to full, but then Valeria fails to resist the second dark pulse that emanates from the idol. In a fit of newfound rage, she promptly stabs Frak in the gut, severely injuring him again.
Kyuubi, witnessing this bizarre exchange and resisting the effects herself, runs up and heals Frak with her magic.

Lurenna, realizing something, casts a Protection from Evil 10’ radius spell. It shields the PCs in a sphere of protective energy, that eliminates the influence of the idol. The rage welling up in them vanishes instantly.
The remaining mob charges the group, but as soon as they enter the circle, their rage is nullified, causing them to stop in their tracks.
Lurenna casts another Protection from evil spell on their leader, a corporal, and they leave, safe from the effects of the idol.

The PCs make their way down the stairs.
Frak tries to pick the lock, but fails. Lurenna uses a Knock scroll and the gate opens.

The see a set of stairs heading down some 60 feet before leveling out. There is also a 10’ wide hole in the wall of the stairs halfway down. Valeria cast detect evil and determines the evil is emanating from the hole.

They enter the hole to find a natural cavern system.
Val casts a light spell.
Frak looks for tracks and finds some belonging to a large humanoid and a large goat.
In the distance, on the far wall, they see words written in infernal, in blood. it says “All hail Eltab, ruler of Kor Nar”

It occurs to me that my lock picking skills could use some work…. lol

Have you looked up your bum?

No part 6 here….. but I did just increase my bum picking skills!

When Darkness Calls: Part 6 What lurks below