Rhiannon, having split from the party to warn the caravan, decides she cannot leave her companions to their fate. As soon as she has met up with the merchants and delivered the news, she hastens back to the the capital as fast as her horse can take her. She pushes her mount farther than she might have otherwise, but speed is of the essence.
She makes her way into the city, and tracks her companions as best she can using a Locate Object spell to home in on Kyuubi’s mask. Although her target is out of range, she does discover fresh tracks in the thin layer of snow dusting the streets. She follows these north into the city.
On her way, she encounters the same demons her friends did. With a well placed Web spell, she neutralizes them and escapes.
She makes it to the grand plaza where the others had the fight with the mob, and here, her Locate spell picks up Kyuubi’s signature. She follows it to the well, and down, past the iron gate, into the cavern below.

To Rhiannon’s relief she finds her companions alive and well, contemplating their next move. They exchange warm greetings and survey their options.
Standing in the circle of illumination cast by the Light spell, the group spies a tunnel beyond the demonic script daubed on the wall. The natural cavern gives way into a man-made chamber by way of a broken wall. It seems as though whoever did this, was looking for an older, buried structure, and found it.
It appears to be a lost catacomb of some kind below the city. 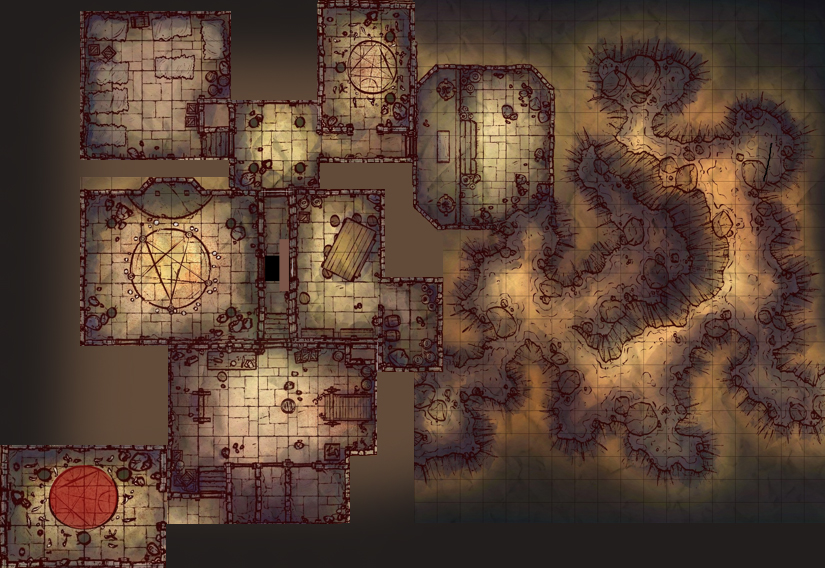 They enter to find a chamber with a blood stained altar positioned between two fierce looking statues of demonic figures. Large urns sit in the corners caked with dried blood on the inside. It appears they have discovered a sacrificial altar to a demon lord, most likely Eltab. Aside from these disturbing items, they find little else.
Behind the altar they see an open door leading further in, soft candle light glowing from a door ahead.

Beyond, they enter a short, dark corridor which opens up after several feet. They pass an room with a demonic circle on the floor surrounded by three candles and an equal amount of large bowls filled with fresh blood.. A flayed man lies spread eagle on his back in the middle of this great glyph. They realize to their horror that he is still alive, and moaning softly in agony. Upon closer examination, they deduce with spellcraft that it is some kind of summoning circle.
Kyuubi notices something is off about the man, and realizes it’s an illusion. She casts a Detect Magic. The spell appears to be of the school of Summoning. She cautions the others to avoid touching the figure, the circle, or anything in the room for that matter.

They move into the square chamber beyond to the west. There are three other closed doors here, one in the middle of each wall, except the east. In the distance to the south, Kyuubi hears a skittering sound echoing, and then fade away.
They decide to check the door to the north first. Frak checks for traps. Finds it is trapped and locked. He tries to disarm it, but is unable to.
They check the door to the west, and find it unlocked. Inside, they find a crude bed chamber for the cultists. Loose crates and blankets are arranged in a crude row. They find little evidence or items of interest here.

Finally, they check the door to the south. It opens up into a hallway five feet wide, with two doors halfway down on the eastern and western walls. They move down the corridor cautiously, and are able to discover the trap before falling in. Set in between the two doors, filling the width of the hallway. They trigger the pit on purpose, and it collapses into a chute that plunges down as far as the eye can see into the darkness.

They investigate the two rooms adjacent to the pit.
The room to the east opens easily, and seems to be some kind of kitchen or dining hall. A table and several chairs dominate the room. A stove with a pot of food upon it stands in the corner, and there is an adjacent room with stored food and supplies. These are basic and crude, but have been recently restocked.
Frak tests the stove and notes it is warm to the touch, indicating someone was here recently.
They take the long bench by the table and use it as a bridge to cross the pit into the other room.

The room to the west also opens without resistance into a large chamber with a small raised dais on the northern wall. A grotesque, horned statue of Eltab perched upon it.
Filling the floor of the room is a large demonic circular inscription, surrounded by candles. It seems to be some kind of summoning ritual, but it looks like it was interrupted. Candles are still lit around its circumference, illuminating the hallway and shedding some welcome light. They see little else that raises their concerns and move on.

They lift and change the angle of the bench to run north – south along the wall to make it easier to cross the dangerous pit.
They proceed south, entering what appears to be a poorly lit torture chamber – a single oil lamp glowing on the wall nearby. A large rack stands against the eastern wall. They immediately notice a man in robes lying on top, motionless. 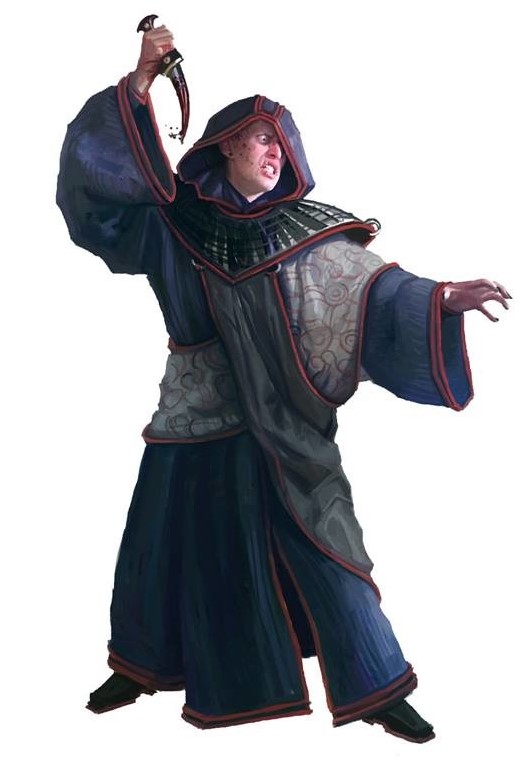 Frak moves to investigate., and the man bolts upright, stabbing at Frak’s chest with a dagger. Frak’s reflexes save him as he twists out of the way.
At that point the remaining 4 cultists fire their crossbows from hiding.
The PCs are hit with several bolts, and are initially taken aback, but rally within moments. Realizing their opponents were lurking in the shadows, they seek them out and end them quickly. The wretched cultists are no match for our valiant heroes, yet they seem resolved to inflict as much damage as they can. Perhaps they were only meant to slow them down?
Searching the bodies reveals them to be human, with ritual scarification adorning their foreheads. Some kind of demon emblem denoting their allegiance to Eltab.

Following the only exit in the south of the chamber, they find another room, again with a circle of power on the floor. A pool of blood-like fluid fills its entire area. It is clearly magical.
Rhiannon and Kyuubi put their heads together, and come to the conclusion that this is a portal of some kind, but it is not inter planar. The magic is apportative in nature, rather than some form of conjuration.
They also determine that the magic is only sufficient for a localized translocation.

Frak and Valeria volunteer to test out the portal, and following a brief discussion, step in. Kyuubi and Rhiannon suspecting something, rush back to the first chamber with the flayed man, thinking it might lead there. When they arrive however, Frak and Valeria are not there.

Meanwhile, Frak and Val arrive at the other end, in a vastly different dungeon. Looking more like a disused, vaulted cistern. Aside from the dripping sounds of water, they hear skittering noises echoing in the distance…..