Demon Lord of the Hidden Layer of the Abyss

According to the members of Nexus, who saw the Demon Lord first hand:

Eltab appears as a fifteen-foot-tall humanoid with the head of a canine-like creature. His head sports numerous antlers and horns and his body is covered with bony dark red plates. He has slitted yellow glowing eyes.

Eltab ruled the 248th layer of the Abyss known as the Hidden Layer. It was a vast wasteland of boulders and fissures constantly beset with intense electrical storms, making it inimical to most life except for demons and deadly plant life such as viper trees, ironmaws, and bloodthorns.

Thanks to the bindings cast by the Narfelli demon-binders on Eltab when they summoned him, they also somehow linked fragments of the Hidden Layer to Faerûn, as well. Pieces of the layer, known as demoncysts, could be found scattered beneath the ground all over northeast Faerûn.
Demoncysts are typically a hundred feet or more in diameter. The environment of the cyst does not interact with the surrounding terrestrial environment (and vice versa). Thus each cyst resembles a cave that contains a wholly different environment than the surrounding earth or open space. Some cysts are empty, but others contain fiends.

The largest cyst, known as the Hall of the Hidden Throne, lies in the Citadel of Conjurers. This cyst contains Eltab’s palace and the calling circle that tied Eltab to the Realms. In fact, until this circle is destroyed, Eltab could not leave Faerûn or return to the Abyss.

The demon lord Eltab was a potent force in the Abyss, rivaling the powers of Graz’zt, Orcus, and even Demogorgon himself. However, during the ancient days of Faerûn, the empires of Narfell and Raumathar engaged in a bitter war (−623 to −150 DR), which ultimately destroyed both empires. During this war, Eltab was summoned to Faerûn by the so-called demon-binders of Narfell, so he could be used as a pawn against their hated enemy.

In −148 DR, Eltab led a demonic horde on the behalf of Narfell and invaded Raumathan, a city of Rashemen, which he quickly conquered and set up himself up as its ruler.
Eltab’s rule was brief, as an alliance of spellcasters (including the Witches of Rashemen) overthrew Eltab in −75 DR.

Eltab was forced to flee, but the Rashemi witches caught up with him in the Sharawood, imprisoning him beneath the ground, and bound a dracolich called the Everlasting Wyrm to guard over him.

In 106 DR, followers of the dark god Myrkul, intending to plunder the hoard of the Everlasting Wyrm, discovered the imprisoned demon lord. They agreed to release Eltab under the condition that he serve Myrkul’s church for ninety-nine years. With Eltab’s aid, the followers of Myrkul took control of the city of Shandaular and in its place, established the theocratic city of Eltabranar.

Later, in 202 DR, Eltab prompted an ill-fated invasion of the nations of Unther and Mulhorand. Eltab was once again imprisoned, this time by the god-kings who led Mulhorand, in a demoncyst beneath Thaymount.

The infamous Red Wizards found Eltab more than seven hundred years later, in 922 DR. The wizards used an ancient Narfelli demon-binding ritual and called Eltab forth to assist them in their war with the Mulhorandi god-kings. The god-kings’ armies were routed and the nation of Thay was established. When the Red Wizards found they could not dismiss Eltab, they imprisoned him near the mouth of the River Eltar, which was named after the demon lord, and built a capital city named Eltabbar over the prison.

Eventually, the Thayan lich Szass Tam realized that Eltab would soon break out of his prison. Instead, in 1370 DR, he deliberately released Eltab with the intention of using a spell to permanently enslave the demon lord with the help of powerful artifacts. But his plan was foiled by a group of adventurers called Nexus. Using powerful eldritch forces, the group opened a rift into Nil space, which banished Eltab, the artifacts, Szass Tam, and several other powerful Red Wizards into the void.

Thaymount was destroyed in the ensuing cataclysmic implosion. To this day, all that remains is a highly dense sphere of rock that hovers over the pit it left behind.

It is not known what happened to those sucked into Nil space. Some argue they were all destroyed utterly. Others argue Nil space exists as plane of existence and can therefore be traveled to and from. Regardless, it would require monumental magics to undo such cosmic forces.

One final thought by the author: The original demon binding that summoned Eltab and bound him to the Realms is not broken. This rift into the void is an anomaly in my eyes. There is a chance this binding may tempt those of ill intent to seek out their former master.
Pray that such a day does not dawn. 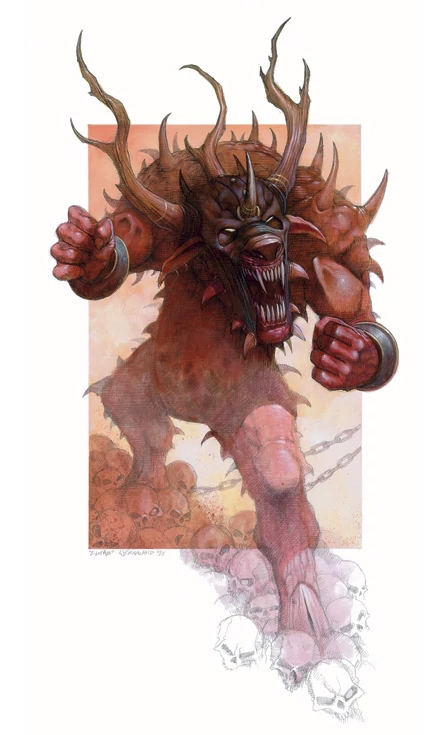