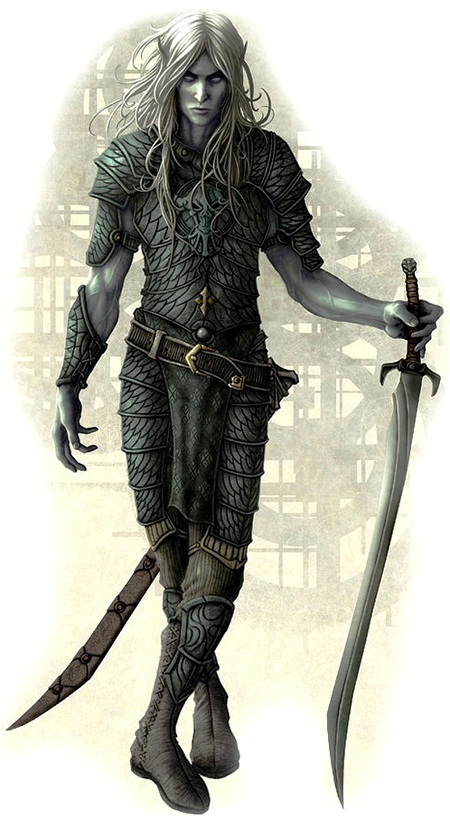 Drow, also known as dark elves, are a sub-race of elves that live predominantly in the Underdark.
They are shorter than other elves and have a tremendous resistance to magic.
They have obsidian-colored skin and white or silvery hair. Drow eyes are usually bright red, purple, yellow, or pale blue.
Female drow are larger than males.

Drow are taught from an early age to trust no one, forging alliances only when they are convenient. Drow find it more difficult to form friendships than most races do.
Most drow are extremely arrogant, sadistic and xenophobic, and hate their own surface kin most of all. There are of course exceptions that choose instead to open their minds and seek to escape the confines of their dark homes, but they are rare. It is important to recognize that though drow are devious, they are not necessarily evil. Drow can become forces of good given the right conditions. However, the mental scars of the Underdark are not easily shrugged off.

Drow admire stealth and guile, and works of great skill. They seek out power and wealth whenever they can. Skill at arms and arcane prowess are greatly respected.
The majority of Drow live in theocratic matriarchal societies, where the worship of Lloth is ubiquitous and her priestesses are feared.
Their society is built up of city states in the great caverns of the Underdark, where great noble houses rule with an iron fist, competing with one another to acquire the most power. It is a brutal and cruel world.

Drow have a unique sign language, that allows them to communicate silently with hand gestures.

Regions: Underdark Drow cities. Drow who grew up on the surface can select another region of their choice.
Racial Spells: Drow Elf wizards can pick one spell from the following list when starting play: Cling, Spider Eyes, Immunity to Adherence, and Masque Mask.