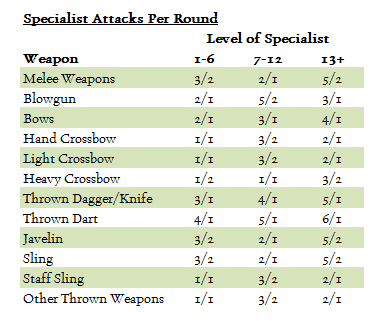 By spending a weapon proficiency slot on a weapon he is proficient with, a fighter character can become a specialist. A single class fighter can specialize in as many weapons as he chooses. Multi-class fighters can only specialize in one weapon (and cannot become masters or higher).

The exact benefits of weapon specialization vary with the particular weapon involved. Generally, the types of benefits fall into one of four categories: melee weapons, missile weapons, bows, and crossbows.

Specializing in a melee weapon grants a character a +1 bonus to attack rolls and a +2 bonus to damage rolls with that weapon and an extra attack once per two rounds.

This category includes slings and thrown weapons. Specialists gain an increased rate of fire and a +1 bonus to attack rolls. If a character specializes in a weapon that can be used either for melee or as a missile weapon (spears, daggers, hand axes, etc.), he gains the melee benefit when using the weapon for hand-to-hand combat and the increased rate of fire for using the weapon for ranged attacks. Refer to the table below for the exact number of attacks available to the specialist for the various types of missile weapons.

Characters who specialize in the bow gain a +1 bonus to hit at any range (normal range penalties still apply, of course), an increased rate of fire, and a new range category: point-blank. Point-blank is any shot between 6 and 30 feet. At point-blank range, the character gains a +2 to hit. In addition, if a bow specialist has an arrow nocked and drawn, and has his target in sight, he can fire at the beginning of the round before any initiative rolls are made.

Specialists with crossbows gain a +1 bonus to hit at any range, an increased rate of fire, and a point-blank range category, just like archers. For crossbows, point-blank range extends from 6 to 60 feet. Crossbow specialists have a +2 bonus to damage rolls against any target at point-blank range. In addition, they share the archer’s quick-shot benefit when covering an enemy with a bolt loaded and cocked.