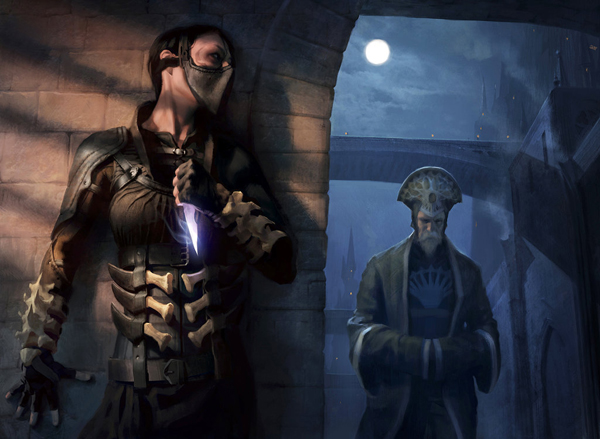 The assassin is the master of dealing quick, lethal blows. Assassins also excel at infiltration and disguise. Their training in anatomy, stealth, and poison allows them to carry out missions of death with shocking, terrifying precision.

To qualify to become an assassin, a character must fulfill the following criteria.

An assassin thrives on anonymity, on surprise – on his victim not even realizing that he is the target until it is too late. A clever assassin might never be seen by his victim. One the other hand, others enjoy cultivating a feared persona or alias, one that inspires fear. Killing for money is by definition a corrupt act, and morally questionable. It requires a certain level of sociopathy to carry out such acts of murder. However, characters often justify their actions in one way or another, say, by only killing a certain group of people, or ones they feel deserve death. This is a morally grey area for the player to explore.

Because of their specialization in the art of killing, assassins are permitted to use any weapon. They are not automatically proficient in them, but are not limited to the list given to regular thieves or bards. Overly large weapons tend to be avoided, as they are hard to conceal, and hinder movement.

Additionally, they automatically become familiar with a group of 6 weapons called ‘Murderous Implements’. This group varies based on how the assassin was trained. Each guild or clan has different weapons it favours. It can be treated as a cultural weapon group for the purposes of purchasing fighting styles or other benefits. This weapon group is determined by the DM.
In addition, an assassin using any of his Murderous Implements receives a +1% bonus to the Assassination class feature for every 2 levels of Assassin. He can of course still use the feature with other weapons.

Assassins will often select a favoured weapon, such as a garrote, serrated dagger, blowgun, or kukri. If the assassin achieves infamy, the marks of his weapon may become known as a calling card.

Animal Lore and Alchemy are considered class proficiencies for this kit, and therefore only cost 1 slot each. (This is related to the gathering of poison materials, and the fabrication of poisons)