Baldur’s Gate, also called simply the Gate, is the largest metropolis and city-state on the Sword Coast, located on the north-eastern border of the Western Heartlands. It is a crowded city of commerce and opportunity, perhaps the most prosperous and influential merchant city on the western coast of Faerûn. Despite its long-standing presence as a neutral power, the leaders of Baldur’s Gate are members of the Lords’ Alliance of powers in the west.

The strong peace-keeping force known as the Watch, along with the presence of the powerful Flaming Fists mercenary company, keeps the city generally peaceful and safe. This inherent sense of security has allowed the Gate to keep a tolerant and welcoming attitude towards outsiders, whether they are wealthy merchants, poor refugees or, as it has historically attracted, less-scrupulous individuals such as pirates and smugglers. 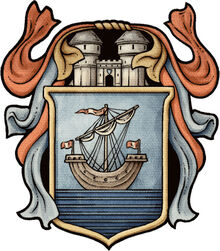