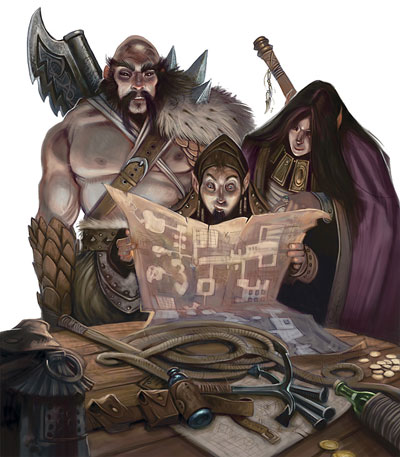 Roll 4d6, discarding the lowest die, six times. Assign the six totals to the ability scores as desired. Use the tables on this site for ability scores. The DM may allow some movement in the numbers. We are creating heroes after all.

Pick your character’s race and sub-race or ethnicity where relevant, noting any modifiers to your ability scores and any other racial traits.

Pick the region where your character grew up. This is not necessarily where he or she was born, but where they spend the formative years of their life. This will provide your character with several options regarding starting languages, equipment, spells, fighting styles and religion. Each race entry also lists several regions. These are the regions in which that race is most prolific, and thus most likely calls home.

Pick a background that reflects the path that brought your character to this point in his or her life, starting out as an adventurer. Each background helps to flesh out what your character did in the years preceding the start of the campaign, and will provide him or her with a few small advantages.

Dual classing is a different option used when your character decides (for story reasons) later in his or her career that a shift is needed. Dual classing is only open to single classed characters.
In this case the player first looks if the character meets the basic ability requirements of the new class. The player then looks at the character’s xp total, and calculates 20% of this total. This is the amount of xp they must earn and set aside to buy into the new class. It is a one time xp cost for the transition into the new class. This xp amount represents your character’s mental transition to a different set of abilities. From that point on, all earned xp beyond the transition cost is invested in the new class. The character becomes 1st level in the new class and levels normally. They can never level more than once per session. If you earn enough to get more than one level, you instead get enough xp to be one point below the total needed for the second level. All excess xp is lost.

Kits are specializations within an existing class that further customize the character and provide a unique set of advantages and disadvantages. Most kits are found in the myriad of “Complete” books and other supplements made for AD&D. Consult the DM if you’re looking for something in particular, or need help with finding something.

Each class receives any bonus proficiencies due to high Intelligence and an additional weapon and non-weapon proficiency every three levels.

New and changed non-weapon proficiencies are covered in the pages linked to above – if it isn’t covered here, default to the PHB.

Each character receives a different amount of starting money based on their class and background. Use the equipment lists given in the PHB or the Whole Realms Catalogue.
Characters who have lived in the wilderness may have had less access to certain goods and services. Consult the DM to determine if the character can purchase items that may not be readily available in the wilds.

Determine final details, including your character’s height, weight and age. These are covered in the relevant tables. Aside from these, you need to decide on your character’s name and physical appearance.
Also think about your character’s backstory. Try to flesh out as much of your character’s personality and idiosyncrasies. Think of where they were born, where they grew up (this will be complemented by your region and background choices of course) and what they spent the early part of their lives doing.
Describe your character’s family. Where are they now? Does your character have many relations? Do they get along? How about close friends?
What are your character’s interests and hobbies? What about their favourite food? Are they well travelled? Do they love to read? The more you can fill in, the better.