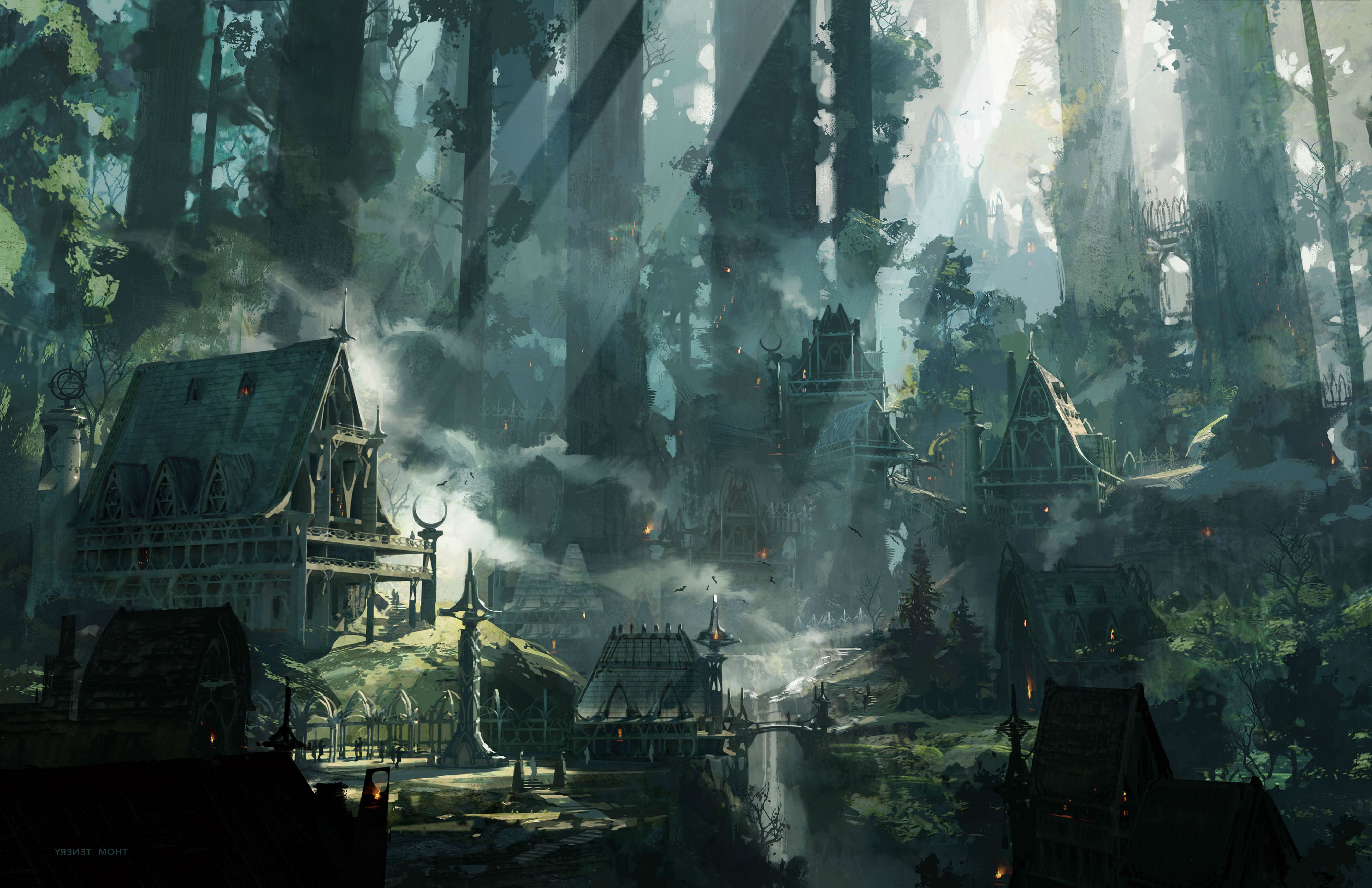 Founded in the Year of the Rose (702 DR), after the fall of Myth Drannor, this sylvan community became a meeting place for elves and humans and a home for druids and rangers. It has remained such, even in these days which has unsurprisingly made this village a Harper base too.

Elventree is a community of approximately 900 humans, elves, and half-elves living in harmony with nature. The village lies at the end of Elua’s Ride from Hillsfar in the west. There is also a trail that goes to the east towards Elmwood. It does not lie directly on the Moonsea, but there is a lighthouse north of the village called Elua’s Lighthouse, and two piers which serve as the village’s harbor, collectively known as Moonport. Elventree is a haven for elves in the Moonsea region, especially those on the southern coast looking for an alternative to Hillsfar and its aggressive and exclusionary policy towards non-humans (particularly elves).

The village is built in typical Elven style with no common grounds or any large structures but instead with natural caverns and hollowed out trees used as homes for its population. Elventree perfectly blends in with the surrounding forest. There is no official ruler, lord, or other authority governing Elventree but the inhabitants are not at all lawless. Following Elven tradition, the residents are required to live in harmony with nature and with its creatures and to follow a code of ethics like that of the Harpers. The villages defenses might seem to be weak but in times of trouble, when danger comes to the villages borders, any able-bodied citizen comes to the aid of the village. This includes a contingent of Harpers, the local clergy, and several powerful mages which call Elventree their home. The official “voice” of the village is the Herald of Elventree, a position currently held by a female half-elven bard named Elanil Elassidil and a sun-elven bladesinger Valin Llanowar.

The village has two major temples. The most prominent temple is The Hall of the Unicorn, dedicated to Mielikki, and home to many rangers and druids dedicated to her service. The other, a temple of Mystra, is located in a hollowed-out tree. There are several other shrines dedicated to Chauntea, Silvanus, Eldath, and the Elven gods Corellon Larethian and Rillifane Rallathil.

The Harpers of Elventree gather at The House of the Harp, a moss-covered fieldstone hut standing in a tangled ravine. The hut itself is merely the entrance to a huge, secret underground complex. Any visitor should be warned that the house is guarded by the ghost of a female half-elven bard who will not allow any kind of unwanted intrusion.

Elventree’s main exports are masterwork bows and arrows crafted by some of the finest bowyers and fletchers of Faerun, but it is also known for its medical plants, herbs, wood carvings and tapestries. The best place in Elventree to trade goods is the Gold Cave, a shop located in a natural cave near the center of the village, neighboring the village’s finest inn, called the “Swaying Bough”.