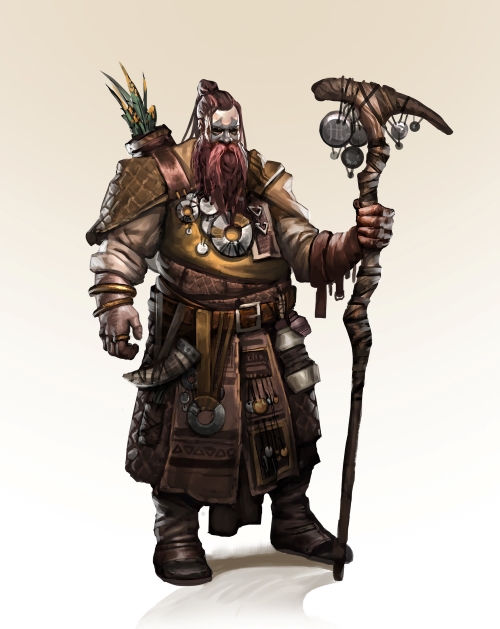 Though a skilled healer, the Medicine Man or Woman has responsibilities beyond curing the sick, and ministering to the wounded of their people. They also serve as a counselor, teacher, and spiritual advisor, using gentle words and supernatural forces to promote their well being.

To qualify to become a Medicine Man or Woman, a character must fulfill the following criteria:

Role:
The Medicine Man or Woman assumes the role of caretaker for any group with which they align. They gather up healing herbs for the wounded, stay up through the night with the sick, and preside over funeral rights for the dead. They are unusually reflective, and take great interest in the natural world around them. To them, nature is a provider of nourishment, healing, and other resources. It is however also uncaring and merciless. It is eternal.
Their intimate knowledge of the natural world also gives them incredible insights into its dangers. They are experts in poison lore, and use this knowledge to help identify toxins that afflict their patients, as well as use them offensively to aid in combat. They will most often use debilitating or paralytic poisons to that effect. Using instantly lethal toxins themselves goes against their beliefs and will result in the loss of their connection to the spirit world.
On the battlefield, they fight with as much ferocity and valour as any of their ilk, but with a level of selflessness that is indicative of their need to aid others.

Medicine Men and Women can fight with all the weapons normally allowed to Barbarians.

Animal Lore, Alchemy, Knowledge Astrology, and Knowledge: Cosmology are considered class proficiencies for this kit, and therefore only cost 1 slot each. (This is related to the gathering of poison materials, and the fabrication of poisons, as well as their knowledge of the heavens and the spirit world)

Due to their intimate knowledge of the healing arts, they also recieve a +2 bonus to all Healing and Herbalism proficiency checks