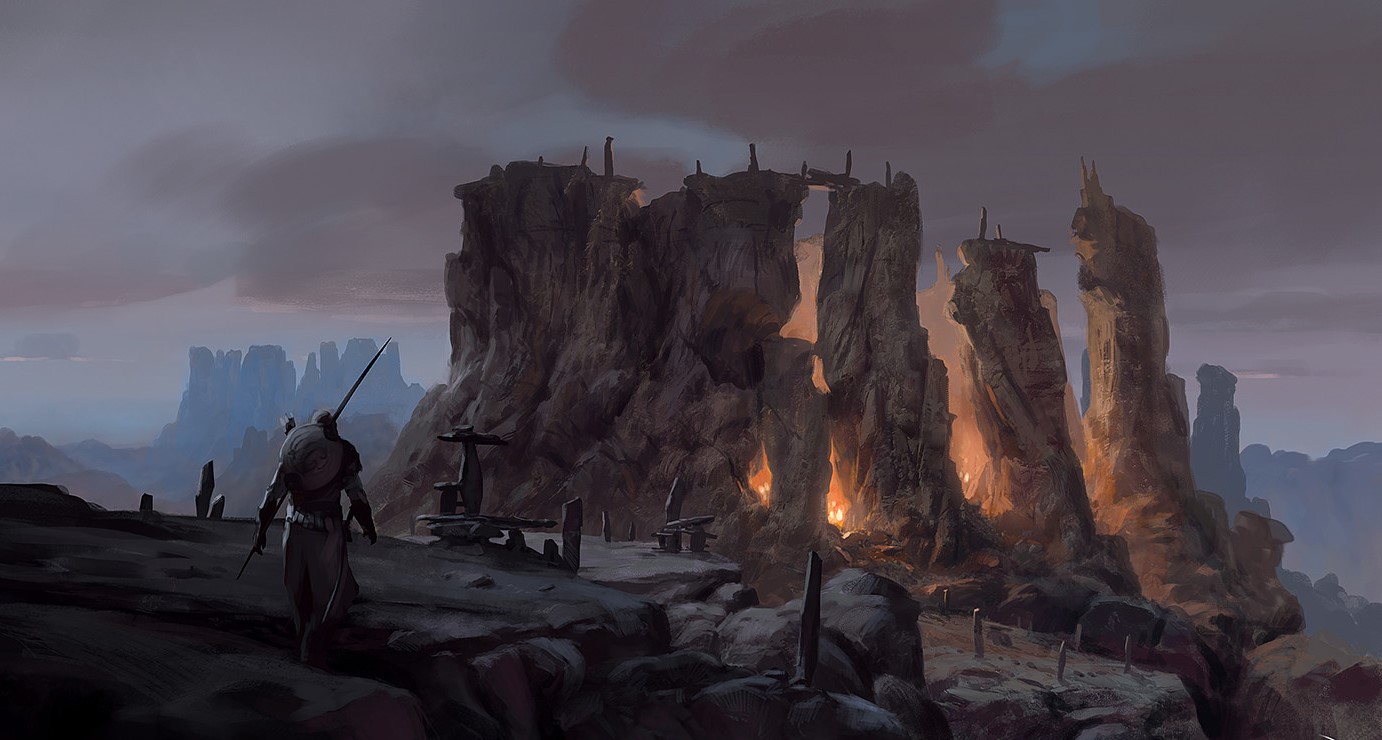 A country where only the strong survive, Narfell is a land of infertile soil that supports only scraggly grass, broken forests, and stark highlands . The people of Narfell are tribal folk called the Nars, fierce warriors who believe that all people are judged by their actions. Their motto, “Deed, not blood,” shows their disregard for those who expect deference because of “noble” birth. Some of the tribes are hostile to outsiders, but all set aside their differences once a year for their great trademeet

In addition to the Nar tribes, Narfell is home to tundra yeti and hordes of hobgoblins in the mountains. Ancient Narfell was a powerful, wizard-ruled state that was destroyed in wars against the now-fallen empire of Raumathar. The barbaric folk living here today remember little of their civilized past, but the Nars occasionally find buried cities within their land, each containing great items of battle-magic.

This broken land is home to vast herds of mountain goat and wild oxen and the nomadic horsefolk who feast on them. The Nars move with their food, erecting “waymeets” (temporary tent villages) wherever nightfall finds them. They gather annually at Bildoobaris for a tenday-long Trade Fair to meet outlander merchants in a massive tent city.

At the Trade Fair, the twenty-seven Nar tribes determine common policy for external matters such as wars and meet with outlander trade delegations. During the rest of the year, fast-riding messengers maintain communications between tribal chiefs as needed.

The Nars are loosely united in a tribal council led by the largest tribe, Harthgroth. The Harthgroth, who can muster four thousand riders under the grizzled old warrior Thalaman Harthgroth, regard outlanders as sources of trade-wealth rather than foes to be robbed or slain. Other tribes are far more hostile-notably the Creel, who attack outlanders and other Nars on sight. The Var tribe, however, welcomes outlanders, and its people strive to become more like them. The Dag Nost are as civilized as folk in Impiltur.

Nar tribes don’t use badges, uniforms, specific colors, or identifying banners. An outlander who doesn’t look like a Nar always travels in peril. Nar value their riding mounts above all else. They are the chief wealth and primary trade-goods among the Nars, who love to barter and buy, having a weakness (the men in particular) for jewelry and bright-colored clothing.

The region of Narfell was once the heart of a vast empire that stretched from the Giantspire Mountains to Lake Ashane which included the Great Dale, much of Thesk, part of the Plateau of Thay, what would become Impiltur, and other lands.

In its height of power, Narfell was ruled by evil priests. They maintained their power through horrid blood-pacts with demon lords, gaining the control of demonic armies. This once great civilization fell over 1,500 years ago in a terrific battle with its ancient enemy, Raumathar.
In -970 DR, Thargaun, the Nentyarch of Tharos, built his capital at Dun-Tharos and forged the artifact known as the Crown of Narfell. He then began to conquer the surrounding Nar kingdoms, bringing them under his rule. In -946 DR, the nentyarch’s armies destroyed Shaundaular, the capital of Ashanath, and all of the Nar kingdoms were united into the new empire of Narfell. Circa -900 DR, both the Nar and Raumathari Empires rose to prominence. In −623 DR (the Year of Clipped Wings), Narfell attempted to invade both Mulhorand and Unther by sea, which failed. In -160 DR, Narfell and Raumathar began their decade-long war that involved the summoning of demon lords and an avatar of Kossuth. This final war resulted in the destruction of both empires.
The empire’s few survivors fled to Narfell’s current borders, vowing to rebuild their mighty realm. That dream, however, has long since faded. Now, Narfell is a frigid land of barbarian tribes who have little or no knowledge whatsoever of their grand and sinister past, preoccupied as they are with simply surviving the region’s harsh and bitter winters.
The remnants of Narfell’s magnificent empire still exist, the ruins littering the region’s plains. These ruins are often avoided by the Nars, for they have learned that the ruins usually contain ancient and long-dormant magical traps, as well as ghosts and wraiths. Once in a while, a group of foreign adventurers decides to explore the ruins. The Nars regard those who open tombs and plunder ruins as dangerous fools who are all too likely to hurt other people with their reckless prying.