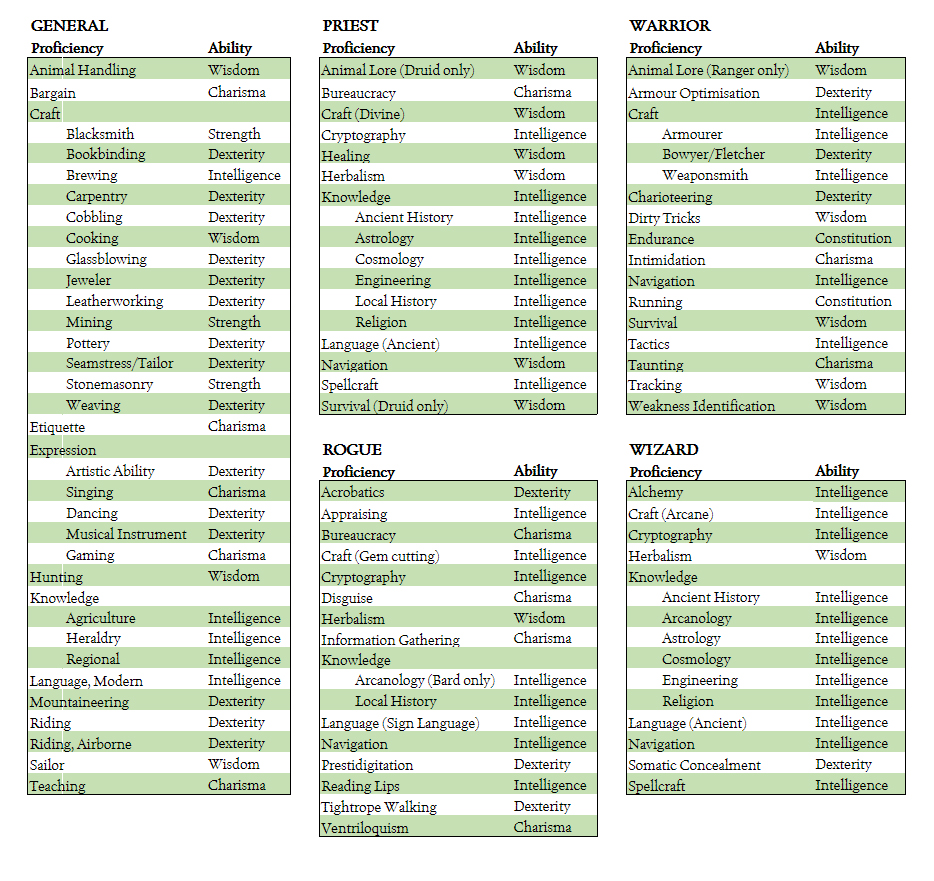 Characters start with the following proficiencies at 1st level:

Add to these any bonus non-weapon proficiencies accrued due to high Intelligence and other sources.

All characters receive a new weapon and non-weapon proficiency slot every three levels. Multi-classed characters must choose one class at first level that determines when they receive these as they level. Usually the fastest leveling class is selected for this purpose.

When selecting Non-Weapon Proficiencies, each class has groups (as listed in the table above) that are considered in class. Any other group is considered out of class, and these proficiencies cost one additional slot to acquire. Some kits will alter the table below. Multi-classed characters can access all the groups available to each of their classes.
Consult the table below to determine in class proficiency groups.

If a proficiency check is required, the able lists which ability is used with each proficiency. The player rolls d20 and adds the relevant ability score. The average target number is 21, but can vary depending on the difficulty of the task. Variable target numbers for proficiency checks are 10 (trivial), 15 (easy), 21 (average), 25 (hard), 30 (very hard), 35+ (almost impossible). A roll of 1 is always a failure. A roll of 20 is always a success. The DM determines what effects, if any, accompany failure.

Of course, to use a proficiency, the character must have any tools and materials needed to do the job. A carpenter can do very little without his tools, and a smith is virtually helpless without a good forge. The character must also have enough time to do the job. Certainly, carpentry proficiency enables your character to build a house, but not in a single day! Some proficiency descriptions state how much time is required for certain jobs. Most, however, are left to the DM’s judgment.

The DM can raise or lower a character’s chance of success if the situation calls for it. Factors that can affect a proficiency check include availability and quality of tools, quality of raw material used, time spent doing the job, difficulty of the job, and how familiar the character is with the task.

When two proficient characters work together on the same task, the highest ability score is used (the one with the greatest chance of success). Furthermore, a +1 bonus is added for the other character’s assistance. The bonus can never be more than +1, as having too many assistants is sometimes worse than having none.
Non-weapon proficiencies can also be improved beyond the ability score the character starts with. For every additional proficiency slot a character spends on a non-weapon proficiency, he gains a +1 bonus to those proficiency checks. 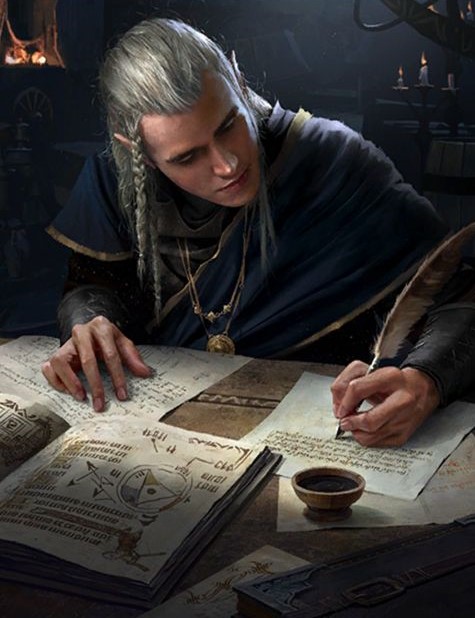